Chet Anderson was working at the Pottawatomie Park concession stand in the-mid 1940’s when the idea of buying a boat and offering rides to the park picnickers began to take shape in his mind. Before long, he made his dream a reality when he bought his very first boat, the Honeymoon Queen for $200 in 1945. After extensive repairs had been made, the boat started making trips up the Fox River from Pottawatomie Park, and a business was born that has endured for more than 70 years.

Over the years, several newer boats have replaced the original Honeymoon Queen. In the mid 1980’s, the boats that are currently in service were built: The St. Charles Belle II and Fox River Queen. These boats have spacious enclosed lower decks and open upper decks, which are ideal for watching the sunset and enjoying the beautiful river views.

Chet retired in the 1980’s after captaining his boats for almost 40 years. His son, Rich Anderson, and another captain took over the helms of the iconic boats until 2018 when the St. Charles Park District purchased the business. The District is truly honored to carry on this unique experience in our community, which has been an integral part of the local landscape since 1945 and continues to be a beloved symbol of St. Charles.

Our First Boat
The Honeymoon Queen 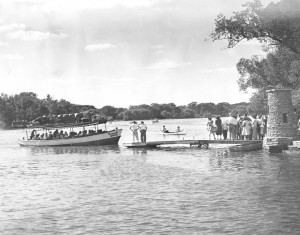 Chet Anderson and
the Honeymoon Queen 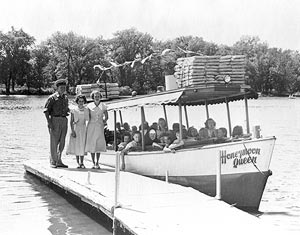 As late as the early 1830’s, a tribe of 300 Pottawatomie were still encamped in the area that is now Pottawatomie Park. Anglo-American settlers began arriving in St. Charles, and as in many other areas of the country, the Pottawatomie Native Americans were forced to resettle further west. Their descendants now live in Eastern Kansas.

In 1890, a group of businessmen converted 35 acres of land along the Fox River into a private park. A large pavilion was completed in 1892 to be used for dances. Later, a concession stand and swimming beach were constructed. Tourists came from Chicago on the Great Western Railway. A hotel was also planned but never constructed.

Fearing more commercial development, St. Charles established Pottawatomie Park in 1911 as one of the first public parks in Illinois. During the Great Depression in the 1930’s, Pottawatomie Park received a large federal grant from the Works Progress Administration. The grant was used to construct the amphitheater, baseball diamond, swimming pools and golf course.

Pottawatomie Park continues to be a popular destination for both residents and visitors to St. Charles.

The photos below are courtesy of the St. Charles History Museum. 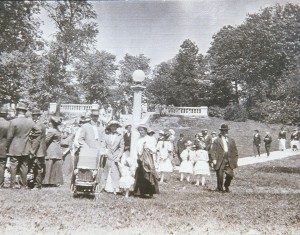 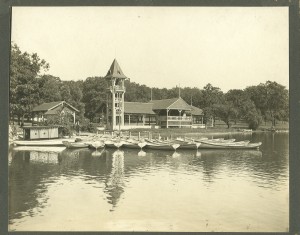 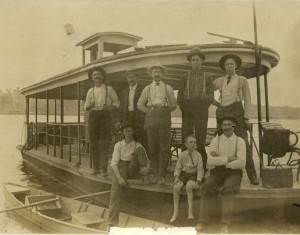